kuš! komiksi is a themed comics anthology series based in Latvia that features Latvian and international artists. In 2012, it was nominated for ‘Best Publication Design’ and ‘Best Anthology’ at the Stumptown Comics Arts Awards.

I was introduced to this series through its 9th volume, “Female Secrets” which was guest edited by Ryan Sands. The comics included are rather short, with a lot of 3-4 pagers, and there are also many illustrations drawn in a wide range of styles. Printed in full colour, it’s quite the visual treat. In addition to showcasing the work of comic artists I already enjoy like Lala Albert and Angie Wang, it’s also a great little introduction to, or sampler of, new comics artists to follow. Its sturdy, pocket sized format makes it perfect for commuting and traveling.

However, if you are looking for more a less stylistic type of comic, Female Secrets does not fit the bill. While all the works featured in Female Secrets are visually striking and creative, it is thin on straightforward narrative stories and dialogue. The narrative comics tend to be more elliptical and surreal.

Unfortunately, Female Secrets is sold out on kuš! komiksi’s website. I received my copy from Sands’ website, Youth In Decline. I’m looking forward to checking out future editions of kuš! komiksi, which I’ve seen carried at The Beguiling, and of course, you can always pick it up online. 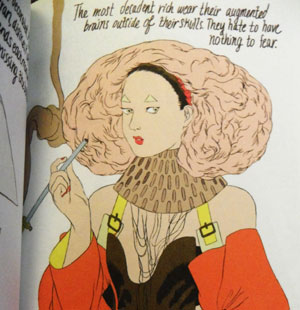 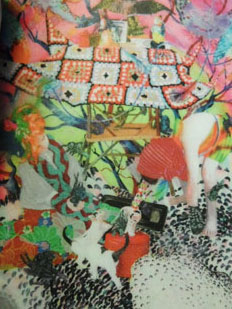