It seems to me that TCAF doesn’t just get bigger every year; it gets better. I’d like to write a longer post about how I think TCAF supports the comics community in Canada and beyond (done) but for now, here’s a couple recaps of the panels I attended, a brief list of tips on how to get the most out of the fest as well as a handful of mini-reviews. I apologize in advance for my lousy shots; I’m posting in a hurry!

This was a great panel offering insight from the publishers’ perspective. I think sometimes people can look at publishing as a non-creative pursuit, but I completely disagree. It’s a rare skill to be able to spot potential before anyone else does, to understand how the art that strikes you can be positioned in an ever changing market and competitive environment not only in the present but in the future. Just because you love comics to death doesn’t mean you have the visionary eye for this.

I attended this panel because I’m also interested in the influence commerce can have on creative movements and the culture of creative communities. It was heartening to hear that the panelists are all deeply invested not only in supporting comics and cartoonists but other publishers as well. I’ve worked in (and have friends who still work in) artistic industries with a highly competitive culture in which not one iota of information is freely shared. In contrast, the small press panelists were basically opening the door to any attendees to contact them later for advice!

It was clear from the panelists’ discussion that their work is a labour of love for comics and the artistic communities comics fosters so if there is one thing I took away from this session, it’s a renewed call to support small press for the same reasons that I would urge readers to support independent comic retailers. When we buy goods at Amazon or Indigo or what have you, our monetary savings do come at a more serious cost to us. We pay in other ways!

Given how these small presses foster cultural development, during the Q&A, I asked if any of the panelists were receiving any grants or government funding and was glad to hear that 3/4 panelists were. And after hearing about how small publishers will see their artists gain traction and publish with larger companies, I wish that I had also asked if they would consider teaming up with a larger publisher as an imprint like DC’s Vertigo (well, smaller than Vertigo). We can see this business model in other arts industries (e.g., Fox Searchlight, Random House’s Vintage, etc.). However, I suspect that the potential loss of autonomy would not make it worth it, especially considering the history of mainstream and indy comics in N. America.

I didn’t focus as heavily on finding comics about sex/gender/porn as I did at last year’s TCAF, but here are the sexiest of the bunch: 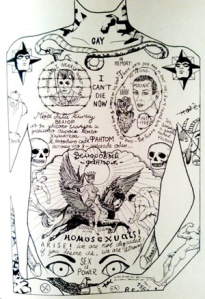 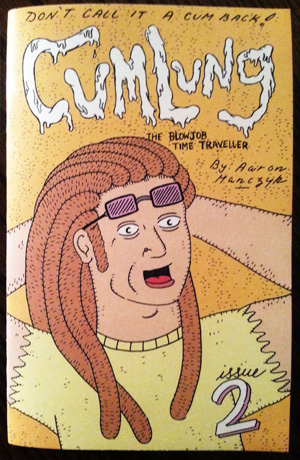 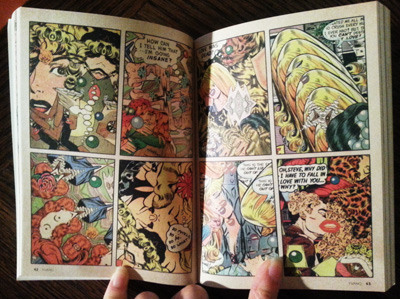 The latest issue of kuš! focuses on the theme of Sweet Romance, although it’s not always so sweet. At turns surreal, irreverant, whismical, confessional and meditative, š!#17 offers up another collection of short comics with the striking visuals the magazine is known for. Favourites included Yvang’s piece (featured above) which takes familiar American pop imagery and then perverts them into a pseudo kalidescopic vision until even the words themselves are rendered abstract and intelligible.

Also, another side note: if you didn’t catch The Last Match show in Kensington, you missed out! In addition to rows of tiny little canvases that begged you to look up close, there was a mural by Patrick Kyle, who drew the cover of š!#17. It was also a treat to meet editors David and Sanita in person, so thanks to the TCAF team for bringing them across the Atlantic! 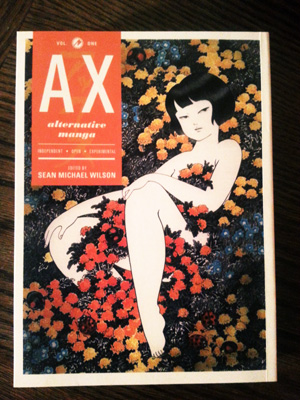 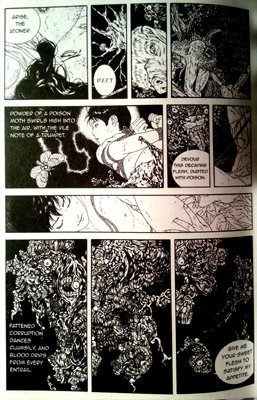 I usually don’t pick up heavy books because they are literally a pain to move and I move a lot. But this collection was too good to pass up. AX compiles the best gekiga/alternative manga that first ran in the bi-monthly anthology magazine of the same name. To be sure, there’s a goodly amount of sex between these covers. Admittedly, I found the translation stiff and awkward at times, but I still enjoyed stories by Katsuo Kawai (no relation lol; Kawai is Chinese), Yoshihiro Tatsumi and Takato Yamamoto (featured above).

Anyways, like I said, I enjoy TCAF more and more each year. MASSIVE THANKS to the organizers and volunteers for running this amazing event! 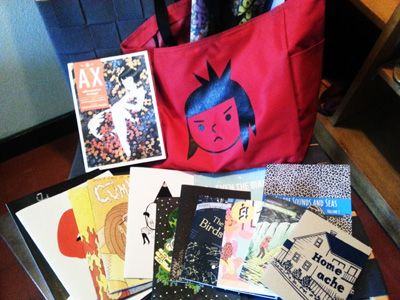 Shopping in style with an awesome Koyama Press tote ❤

TCAF may be over but my TCAF related posts aren’t! Stay tuned for more in the coming weeks…