Frontier’s latest offering, Fatherson by Richie Pope is a colourful work which explores, in Pope’s words, “the gaze and experience around black fatherhood.”

The comic reads more like an illustrated book (perhaps to mimic a children’s book?) but its simplicity is deceptive. The narrative playfully collapses the role of adult and child, confusing your reading of the story: are you looking at a father behaving like a son or a son behaving like a father? It also complicates the reader’s relationship to the text by adopting an instructional, second person voice: are you observing and evaluating the text as though you are a parent, or is it giving you advice as though you are a child? Like the positive face of the fatherson appearing in the negative space of the fatherson’s body in Fatherson‘s cover, we find our perspective flipping throughout the comic. 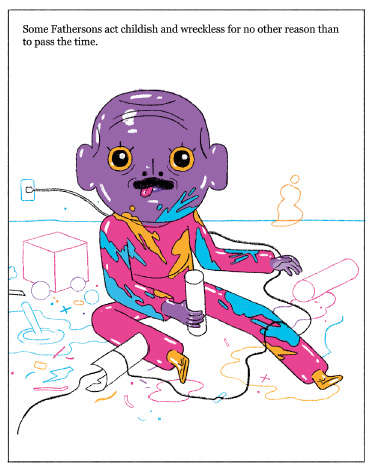 Fans of Michael Deforge will definitely want to check this issue out as the pseudo-scientific, instructional narratives that appear in many of his comics share the same surreal play on an authoritative voice that characterizes Fatherson.

An anonymous, objective authoritative voice guides us through a surreal world in Deforge’s comic

Interestingly, both artists are visible minorities, and even if it is unintentional, I think there is something delightfully subversive in taking an objective, neutral and authoritative voice (arguably implicitly “Western”/Caucasian and/or patriarchal) and using it to describe something fantastical with a touch of the absurd. Rather than launch a direct, formalist critique of this voice, both Pope and Deforge work entirely within formal norms, adopting a vocabulary and tone that is familiar to us. But by pairing this voice with highly stylized imagery and bizarre, imaginative worlds, the authorial voice takes an off-kilter cast and becomes twisted and undermined on the sly. Like someone who is so deadpan, you’re not sure if they’re being mocking or not. It reminds me of something I read recently about hacking: that it’s more damaging in the long run to infect a system than to break it down completely.

I received my copy of Frontier #13 as a digital subscriber to Youth in Decline. You can purchase a copy on the publisher’s website or find it carried by these stockists.