This obit isn’t comics related but I met so many comics people through Queen Video, I thought it was appropriate to post this here. 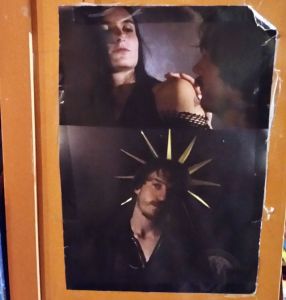 Queen Video’s swan song was like a slow-burn ambient track incrementally building in noise and dissonance until reaching a frenzied climax. We had all known for years that the legendary movie rental store’s days were numbered, not only because of its dwindling staff, but because it had already closed its Little Italy outpost on College in 2014, followed by the shuttering of its original Queen West location in 2016. Its last remaining storefront in the Annex had been selling off its back catalogue for at least a year. Yet when Queen announced it was closing its final location and liquidating its remaining inventory, the weight of finality finally struck me.

In the chaotic days that followed, bargain hunters mobbed the store, forming a perpetually replenishing queue that snaked straight from the store’s counter through its front door right onto Bloor Street. This drawn-out paean for one of Canada’s oldest video stores – Queen had been in operation for 38 years – was perhaps the kind of track one might hear while browsing its tightly packed displays, its every free surface adorned with film posters and cinematic stills cut out from DVD liner notes.

Or perhaps Queen’s slow demise would be more appropriately compared to a Michael Haneke film, the minutes crawling and meandering over treacherous ground toward some inexorable, devastating conclusion. I apologize for leaping from metaphor to metaphor. The mind makes meaning out of metaphor, and in the wake of Queen’s demise, I find my mind restlessly searching for something other than Queen to capture what Queen meant now that Queen is gone. For Queen was my neighbourhood watering hole, my film-studies lecture hall, my urban safe space sanctuary, my therapist’s chair where I was prescribed movies instead of pills. It was all things in the form of a neighbourhood store; it was my Aleph and Zahir.

In fact, it was long-time employee, filmmaker and illustrator, Jacob Wiebe, who had introduced me to Jorge Luis Borges’ short stories, The Aleph and The Zahir. But far more than literature, Wiebe shared with me his expansive love for cinema. He showed me infinity in the form of countless shiny five-inch discs that contained all the realized potential of what happens when light, movement, sound and time meet metaphor: the transcendent world of cinema. I can still recall our first conversation many years ago, in which we agreed Inglorious Bastards was trash because the US was totally fine with Hitler until he started invading shit. But I do like watching films about people being wretched, I’d added, to which Wiebe procured a copy of Mike Leigh’s Naked, a film that remains among one of my most cherished favourites. It defied all my expectations; among them, how this curious video clerk with the mellifluous voice, angular gait, and shock of gravity-defying anime hair had understood me.

Over the years, I grew to know the other staff and entrusted them as well with my time and attention. My viewing self was in their hands. And they were not there to cater to my preferences. They were not breathing algorithms who would say, “we think you will like this thing, which is so very similar to every other thing you like.” They were human beings with their own ways of seeing and loving cinema. Like Aaron, who had a penchant for dry, abstract, oddball humour, or Lisa, whose taste for cult and horror could rival any discerning sommelier. They were always ready to suggest a movie that had moved them saying, “I’m not sure if you’ll enjoy this but I promise it is amazing.” And sometimes it wouldn’t be something I enjoyed, but always, I would have seen an entirely different kind of amazing I’d never seen before.

I came into Queen with a narrow appreciation for cinema that was shocking, mannered and maximalist. Spurning less outré styles, genre works, and anything with excessively long takes, I nursed my weakness for the likes of Catherine Breillat, Peter Greenaway, Shinya Tsukamoto. Each time I left Queen, my desire for film exploded a little more. “Have you seen Hard to Be a God? It’s like a new language for cinema,” they said. “You’ve got to see Ravenous because it’s the best movie about cannibalism,” I was advised. “What do you mean you haven’t seen Trouble Every Day?” To resign yourself to the comfort of your own personal preferences and expectations with something you love, that is the beginning of the decline into obsolescence. It is a classic symptom of existential defeat. In Queen, I may have been aging, but I would never grow old. Queen was my elixir of life.

And so, in growing friendlier with its staff, I began to spend many a whiling hour in Queen Video. It became a regular stop on my weekend errand run for groceries and other necessities. I was practically a decorative fixture at the store along with its rows of neon sticker labels, stacks of community flyers, special edition DVD boxes on display, and the popular plastic jar of doggie treats behind the counter. I spent so many weekend afternoons perched by that counter, chatting with the staff. And when they were occupied, I’d observe the comings and goings of regular patrons unfolding in a messy urban order. Another metaphor then: Queen was the textbook example of Jane Jacobsian “contacts,” these variegated, unplanned, and enjoyable social interactions that also preserve one’s privacy. Queen was a living archetype of how Jacobs believed city socializing works.

In her seminal book, The Life and Death of Great American Cities, Jacobs writes, “… it is possible in a city-street neighbourhood to know all kinds of people without unwelcome entanglements, without boredom, necessity for excuses, explanations, fears of giving offence, embarrassments respecting impositions or commitments, and all such paraphernalia of obligations which can accompany less limited relationships.” I once saw staff pull seats from behind the counter for two patrons to continue a lengthy conversation, all the while thinking, maybe cafés in Europe are like this, where two beautiful strangers can meet and find themselves drawn into a lively discussion. Perhaps they fell for each other; perhaps they never saw each other again.

Like the pornographic theatres of the 1980s that Samuel R. Delany described in his ode to city life, Times Square Red, Times Square Blue, Queen was a community space based on pleasure. People of different backgrounds congregated at Queen, all seeking the myriad pleasures of cinema, creating a foment of what Delany would call “interclass contact.” In Queen, your income bracket was irrelevant; your taste in film, paramount. It was here I met all manner of random film-affectionados with whom I could discuss and debate (for I was prone to giving strongly-worded, unsolicited advice about what to rent).

And while we began with film, we also filled those walls teeming with DVD covers with all of our other human predilections and interests. It was there I met young filmmakers and local artists who stayed to talk shop whereby I learned of underground artist collectives and events about the city; the former Italian fashion designer who loved my Italian moto gloves and spilled tea about the industry; an Indigenous scholar with whom I commiserated about the challenges of writing about race; a messianic Asian who had probably wandered in from the New Age/Burner store Alternative Th!nk!ng on Bathurst and preached to me for half an hour about vibrations; the troubled white gentleman who would shuffle in with disjointed memories penned on sheets of lined paper torn out of a notebook, always graciously received by the staff. This spontaneous sharing of pleasures and interests and yes, even disturbances, between strangers – this is what makes city life. Or, in the midst of renovictions, public transit breakdowns, and climate-change related flooding, this is what makes city life liveable.

A few months before Queen’s demise, my spouse bought a Netflix account. Ignoring its AI recommendations, I eagerly began searching its database but came away horrified. I had assumed access to a rich back catalogue given Netflix’s origins as a film rental service. Instead what I found was a smattering of blockbusters in yet another app designed to suck all the time and attention out of its users. One afternoon, we watched three episodes of Peaky Blinders back-to-back with its entertaining pace, its dynamic soundtrack, its tastefully desaturated palette. I felt nauseous, as though I had physically binged, crammed to bursting as I was with plot, character development, and cliff-hangers. From time to time, my spouse attempts to cajole me into watching a new program with him, always described in superlative terms. It’s the Golden Age of television, he’ll pitch me, television now is like a movie that’s many hours long. To which I say, show me a show that can come close to Chantal Akerman’s Jeanne Dielman, and then I’ll believe you. I’m not cantankerous about Netflix, but what I do know is this: Netflix’s streaming heap of broken images does nothing for me and will never understand me.

In its final days, Queen’s staff began rearranging its inventory, taking its DVD covers for its back catalogue out of the basement and onto the shelves. Rumours swirled among patrons until just after the spring equinox when Queen replaced its storefront posters of recent releases with a stark black, white and red sign announcing: VIDEO STORE CLOSING *30,000 DVDS TO SELL*. I waited for the lineups to pass before I scooped up copies of Kenneth Anger’s Magick Lantern Cycle, Bruce LaBruce’s The Misandrists, and Nasser Saffarian’s The Mirror of the Soul. I brought Girl Scout cookies to the staff and met store-owners, Howie and Penny Levman. I squared up my late fees. My last rental at the store was Hirokazu Kore-eda’s Shoplifters. It’s really excellent, you should see it.

One last metaphor. Maybe this one will stick. Queen Video was an avatar. It was the god of movies taking flesh and form. For so many of us there worshiped at the altar of cinema. And how we each expressed our love for our phantasmic god gave Queen its unique shape. We each drew Queen’s contours beyond its physical boundaries into our homes and our hearts. And in return, we were transported beyond ourselves for a time, transported to all the possibilities of what a loving devotion to cinema in a city like Toronto could be.

But we live in a day and age where everything solid melts into air and nothing is immortal. This is an era when the very gods themselves can weaken, and then die. And so I bid thee good night, sweet Queen. Le cinéma est mort. Vive le cinéma!