2019 was a difficult year for me and I subsequently didn’t work on my own comics, something I hope to rectify in the coming year. I took on volunteer work and a couple leadership positions in a bunch of organizations, including those related to climate justice. This kind of work can easily become all-consuming, but also, when you’re in the thick of it, it’s difficult to step back and evaluate everything you’ve accomplished as an individual and with a group. When I think about it, it all still feels unreal. It’s also difficult to square any efforts you make working to address climate change with the constant onslaught of dire climate news and subsequent inaction. I’m still in awe of the people I met, particularly BIPOC activists, who have been working on climate justice for years.

I also didn’t table in 2019, in part because of my involvement with all these groups but also because I’m reevaluating what’s appropriate for me.

I did manage to have a piece published by The Walrus which has been a long-time goal of mine as I’ve been reading this journal since the mid-2000s. It’s not apparent from the brevity of the article, but this piece ate up many hours of academic research on top of constantly monitoring the news since the situation with Huawei kept changing. This is that research intensive project I had alluded to last year. 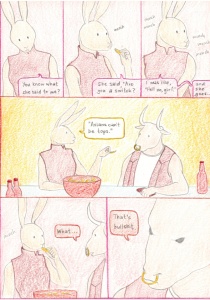 This year, I’d like to return to a comic I’d started working on in 2018 called Under the Influence that I mentioned in last year’s annual overview post. I completed the first chapter but really hated it after colouring it in to the point where I had to concede I need to redo the whole damn thing. Hopefully the second pass shouldn’t take that long and I’ll post that here and maybe on Twitter.

That’s all from me for now. Wishing you a bright new decade filled with great art and many pleasures ✨ ✨ ✨